A transect through the Peruvian Andes

by Martin Gumpoldsberger and Severin Platzer

The Peruvian Andes form the backbone of the country. They are bounded by the Pacific coast in the southwest and the Amazon Basin in the northeast, two areas standing in sharp contrast to each other. Even though the Andes are strongly connected to the forelands in their outer parts, they also display their very individual features, almost decoupled from the rest of the world. This is particularly the case in Boliva, northern Chile and Argentina, and southern Peru. But what makes the Andes so special here, what makes them different from other parts such as the Cordillera Blanca or the Andes of southern Patagonia? This contribution provides an overview of the broad patterns of geology, climate, geomorphology, and vegetation of the southern Peruvian Andes, linking to the contributions on the specific sites where more detailed pieces of information are provided.

The diversity of southern Peruvian landscapes 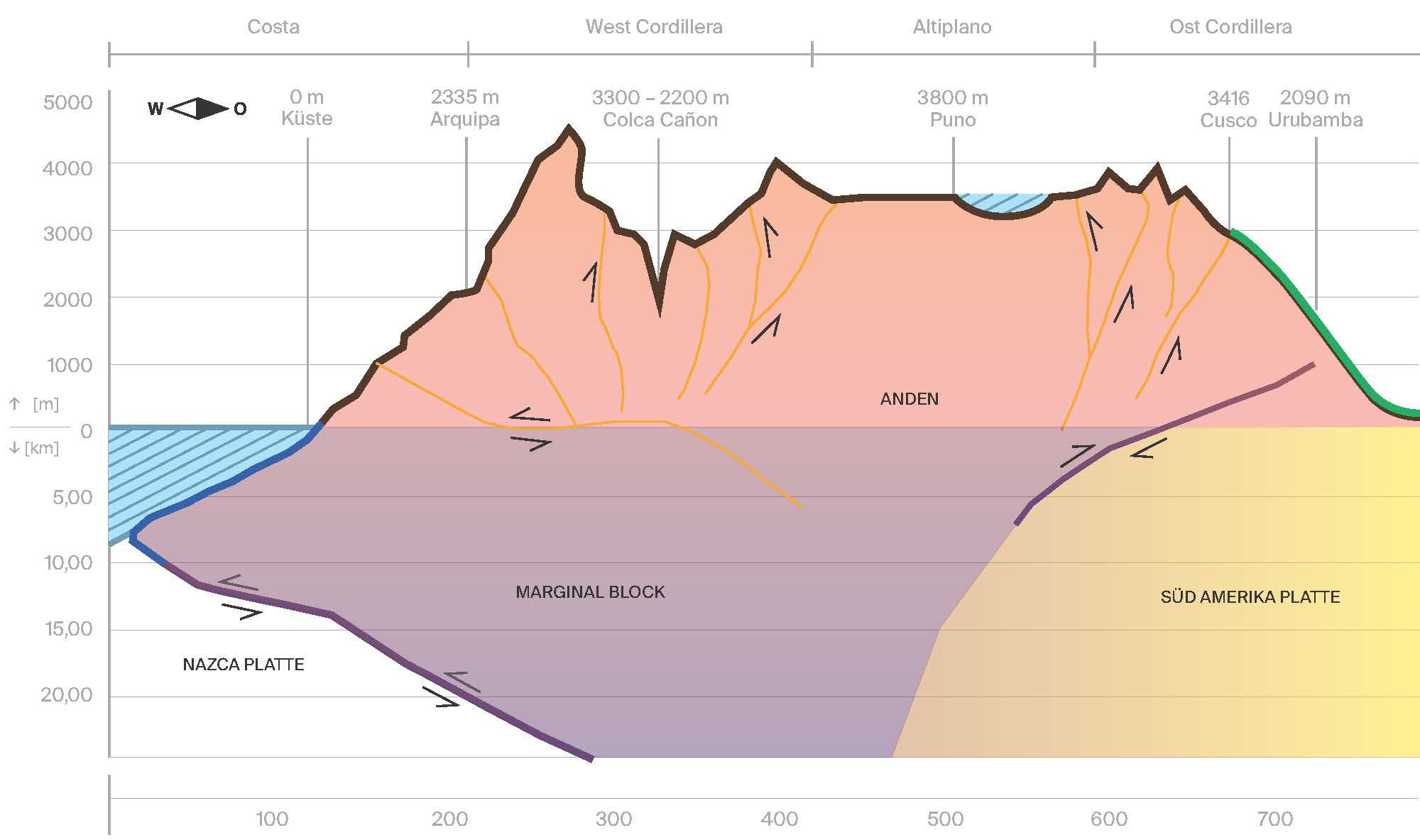 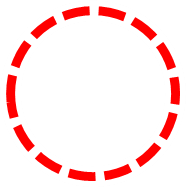 This lake is the highest navigable water body on earth. It contains some inhabited islands.

This legendary former Inca town in the montane rainforest is almost completely surrounded by a tributary to the Amazonas.

This canyon is one of the deepest in the world. It is even deeper than the Grand Canyon.

This regularly shaped mountain consists of a sequence of solidified lava flows and pyroclastic deposits.

This huge endorheic basin extends from southeastern Peru over western Bolivia all the way to Chile and Argentina.

In winter, this place is almost permanently covered by clouds, even though it receives very little rainfall.

Grab the photo by holding the symbol near the upper left corner, and drag the symbol into the corresponding circle in the map. 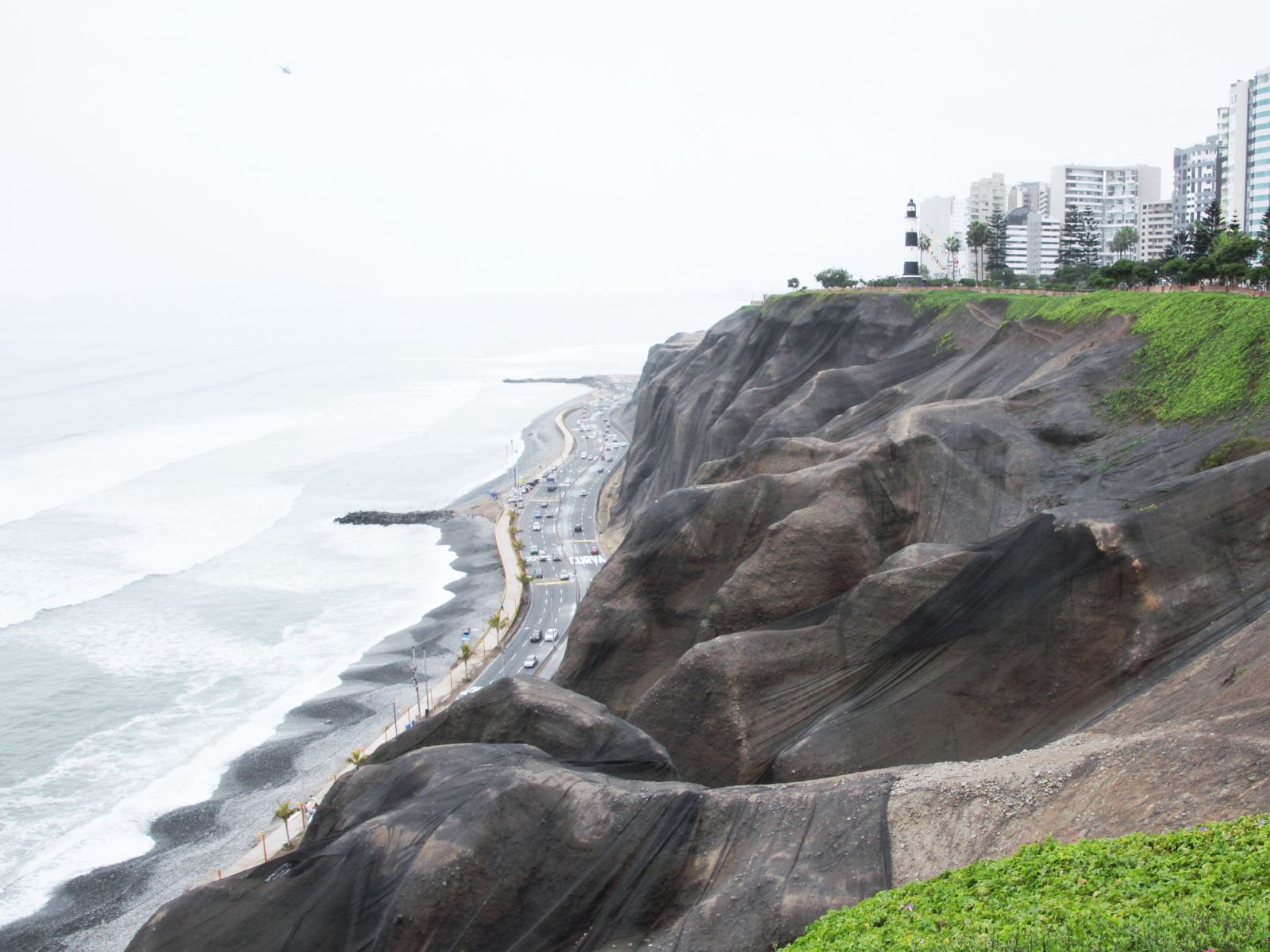 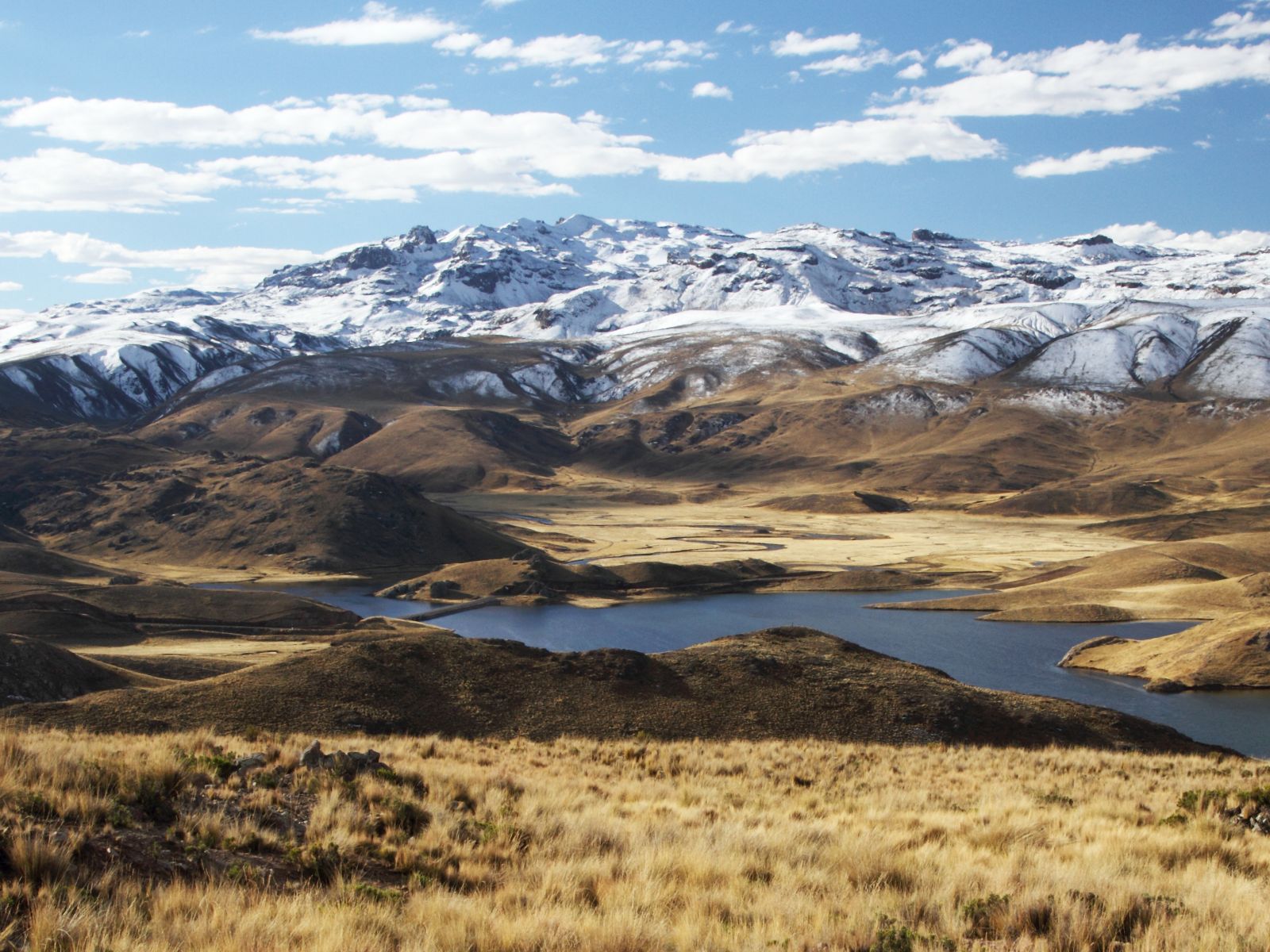 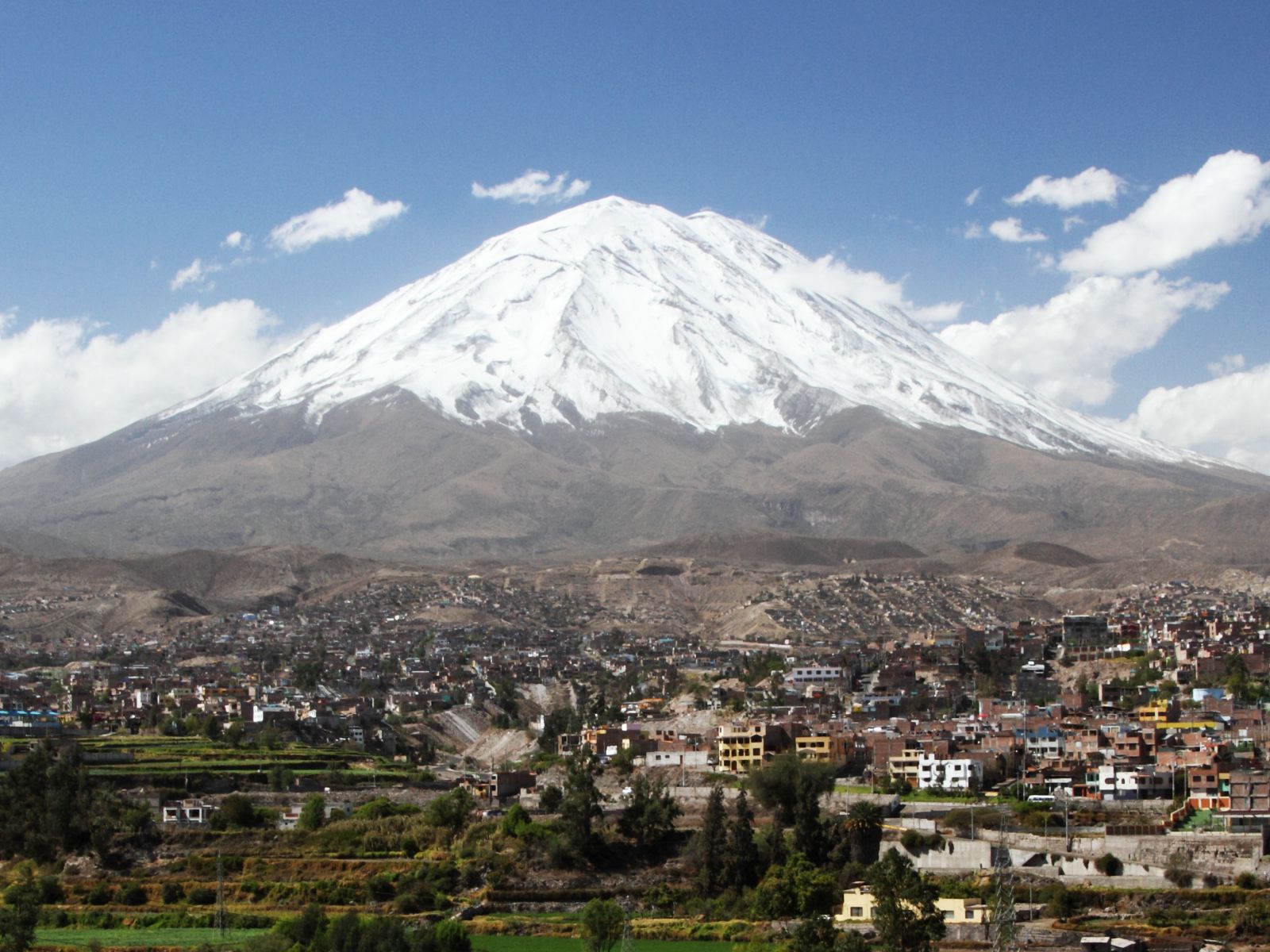 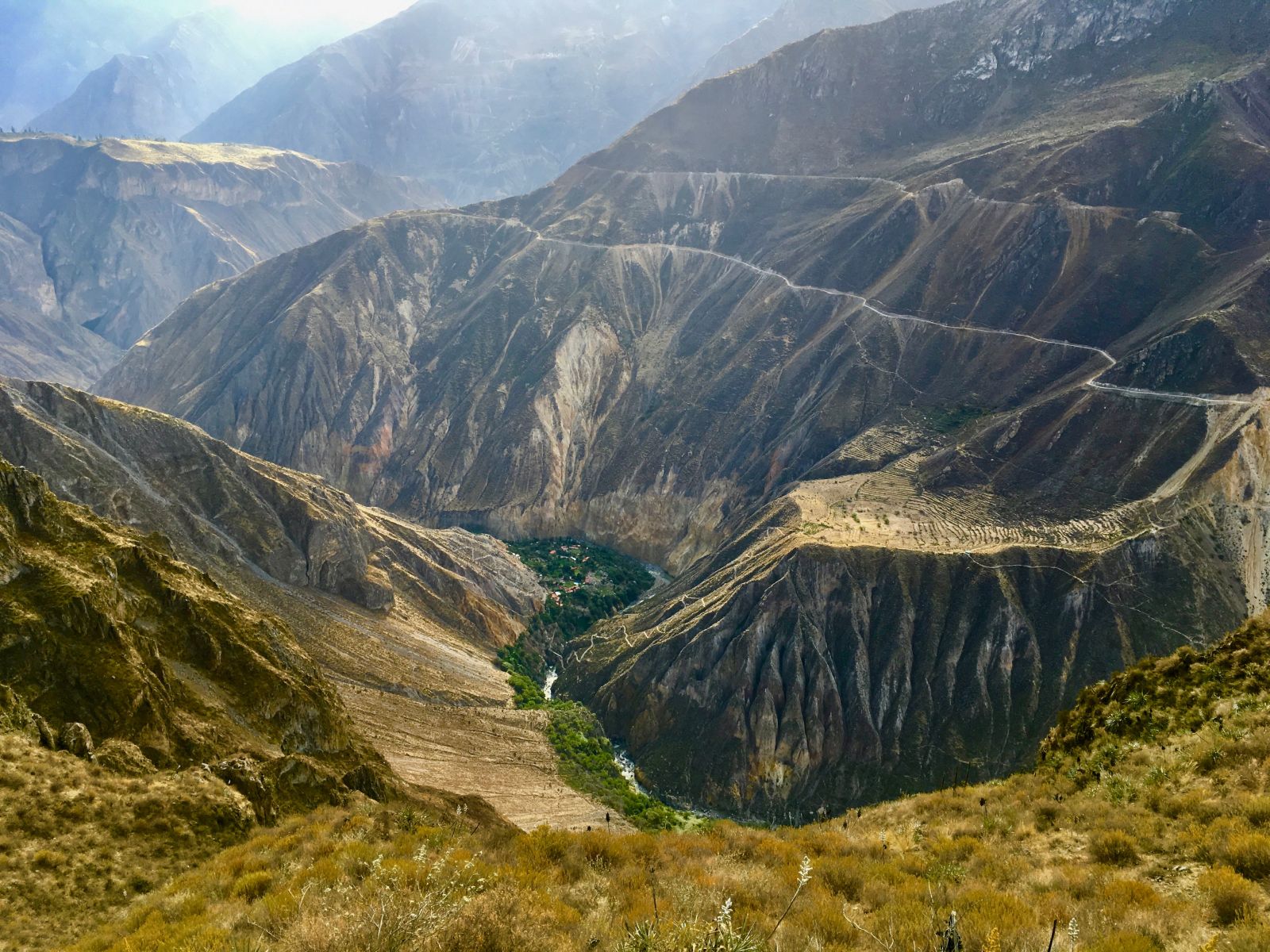 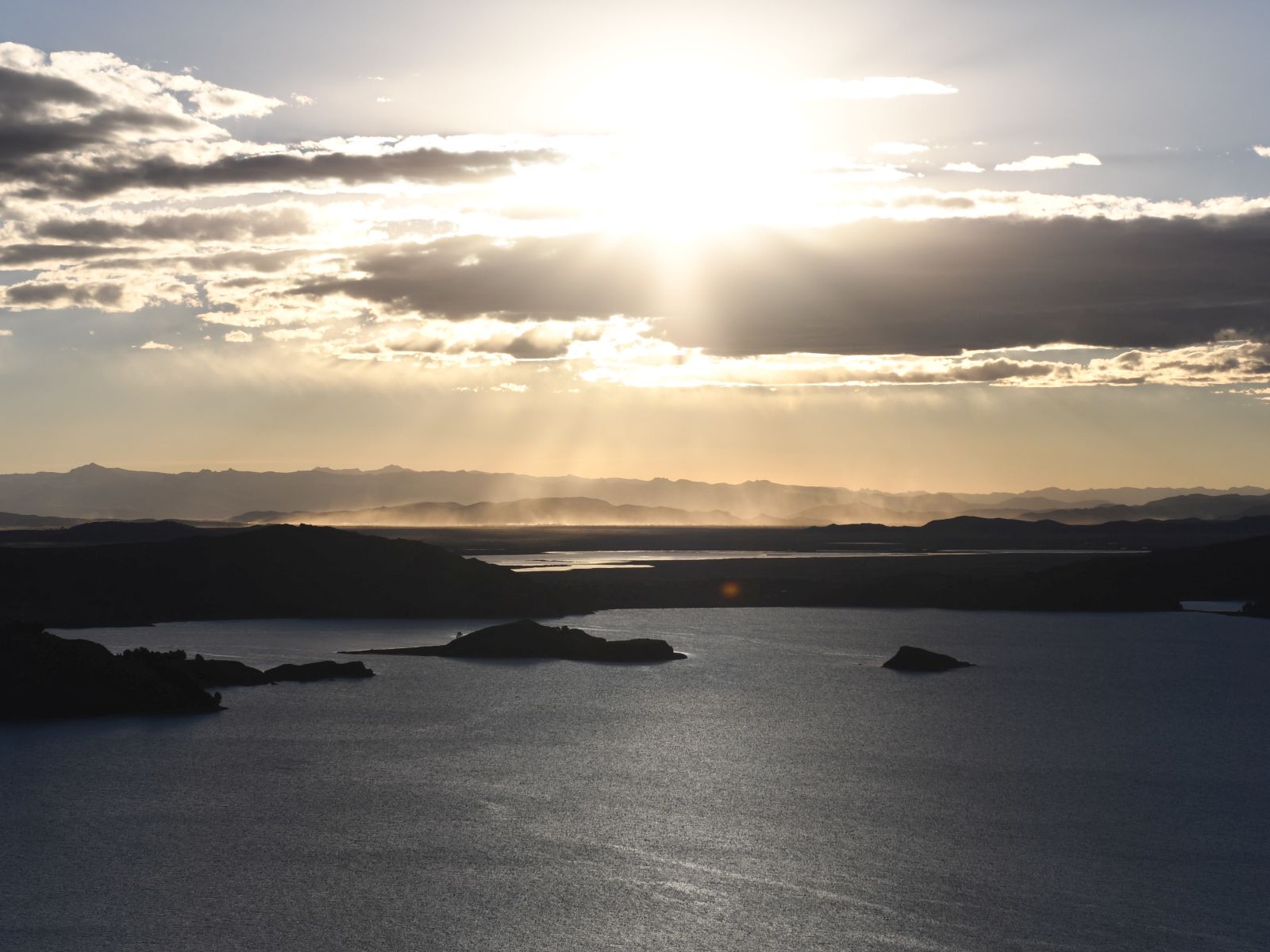 This exercise has provided an impression of the extreme diversity of the landscapes throughout the Peruvian Andes.

You can see the correct names of the locations or landscapes by hovering over the points with the mouse. Click on the points to access the corresponding contribution providing more information.

This profile shows a simplified and distorted representation of reality and does not claim to be complete or correct. Its purpose is to display the key features of the Andes of southern Peru in a simple way.

Try to explain the spatial patterns of landforms and ecosystems indicated in the cross section and in the associated photographs.

The uplift of the Andes has led to the incision of deep canyons into the Andean rims, such as the Cotahuasi Canyon or the Colca Canyon in the southwest, and the valley of the Río Urubamba - where Machu Picchu is located - in the northeast. However, due to the large width of the Andes at this latitude, and also the largely dry climate due to rain shade, the middle part has not yet been reached by retrogressive erosion from the forelands, and forms a huge endorheic basin, the Altiplano. Much of it is located above 4000 m asl. It includes several lakes such as Laguna Lagunillas and the much larger Lake Titicaca. The subduction of the Nazca Plate beneath the South American Plate has led to melting processes resulting in volcanism. The Central Andean Volcanic Zone contains several stratovolcanoes, some of which are active. Examples of stratovolcanoes are Nevado Chachani and Misti near Arequipa.

The tradewinds bring humid air from the Amazon Basin to the eastern rim of the Andes, where these air masses are uplifted and cool down, so that the vapor condensates. The result is plenty of rainfall and mist, supporting montane rainforests and cloud forests, such as around Machu Picchu. The Eastern Cordillera serves as a barrier for the moisture, so that the Altiplano is much less humid, receiving rainfall mainly during summer when the Inner Tropical Convergence Zone reaches the area. The typical vegetation of the Altiplano is the puna, dominated by tussock grasses and dwarf shrubs. The western part of the Andes is dry and, above approx. 1000 m asl., mostly sunny, such as in Arequipa. The coastal areas, in contrast, though still deserts, are influenced by coastal fog particularly during winter. Here, the location in the high-pressure areas of the outer tropics is superimposed by the effects of the rain shade of the Andes and of the stable layering of the air The latter is related to the Humboldt Current and is only mixed up during El Niño events. Such a climate would be typical for Lima, but also for Iquique farther south in Chile.

This contribution was revised and extended by Martin Mergili.