by Martin Pree and Martin Mergili

Lima is the capital city of Peru and the political, societal, and economic centre of this country. The agglomeration has exceeded a population of 10 million and consists in a conglomerate of residential and business areas which can hardly be overseen. The colonial centre is located at a distance of 10 km to the Pacific Ocean, which has eroded a cliff separating the upper class neighbourhood of Miraflores from the beaches and the coastal highway, the construction of which has brought some slight relief to the ever lasting traffic jams. Endless residential neighbourhoods extend towards the Andes, merging into the humble settlements of the new Limeños at the edge of the city. Along major traffic lines, the urban conglomerate is interspersed with huge, postmodern shopping malls - the islands of the rich in the sea of the poor. Welcome to Lima.

You can gain a first impression of the diversity of Lima by clicking in the title image.

You can look around the plaza by dragging the scene with the left or right mouse button.

As in all Spanish colonial cities, the main square once represented the absolute centre. Even today, the Plaza de Armas and its surroundings play a prominent role for social gatherings and as shopping and strolling lane, even though its status has been more than contested by the new shopping malls. The impressive square is surrounded by the cathedral, the archbishop's palace, the presidential palace, and some yellow-couloured representative administration buildings.

A bath in the Pacific Ocean

Adam, Florian, Gerald, and Martin have just returned from some exhausting trekking tours in the Cordillera Blanca and already for some days have been looking forward to a bath in the Pacific Ocean at the beach of Miraflores. However, something appears to be wrong with the water. Have a look at the video first, and then try to interpret the reaction of Martin after he went into the ocean.

Also have a look at the contribution The coastal desert and the Christ Child. It will help you to understand why Lima gives quite a gloomy impression during the winter of the southern hemisphere, even though the city is located in a low-latitude desert area.

Imagine you are on the way to land in Lima. The aircraft is modern and you have your own screen, which does not only show the updated elevation above sea level, but also the outside temperature. How will the temperature change between an elevation of 2500 m (where 16°C are indicated) and the landing at the airport of Callao at sea level? Draw a diagram with the air temperature on the x axis and the elevation on the y axis.

This diagram represents the situation on 8 July 2018 at approx. 6:00 in the morning. Note that only the temperatures at certain levels are known, whereas temperatures in between are the result of linear interpolation.

As expected, the temperature increases to 20 degrees centigrade at an elevation of 1600 m. Farther down, the cold sea water starts to influence air temperature, which cools down by a gradient of 1.5 degrees per 100 m until it reaches its minimum of 11 degrees at 1000 m asl, coinciding with the upper limit of the coastal fog. Below, the temerature increases again by the expected gradient of 0.6 degrees per 100 m, but it does not warm up to those 20 degrees measured at 1600 m asl. The air temperature of 17 degrees at sea level is quite normal for Lima at this time of the year. The sea surface temperature typically ranges around 15 degrees. 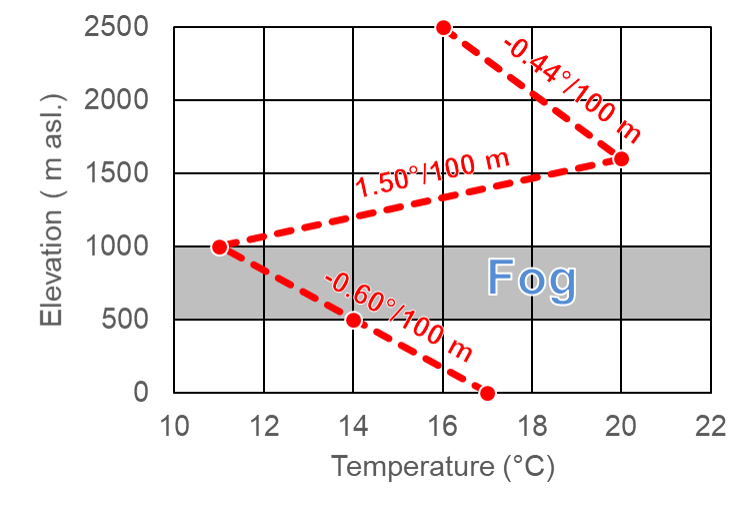 Try to find out the temperature of the sea surface at the Atlantic coast of South America at the same latitude and the same time of the year.

Buildings as far as the eye can see

The Convento de Santo Domingo is located at the edge of the historic centre of Lima. The tower offers a fine view in southern direction over the city centre with the Plaza de Armas, the cathedral, and many tall buildings. In northern direction one can look down to the cloister of the convent and those neighbourhoods located at the other side of the Río Rimac and the Panamericana highway, and to the lookout mountain Cerro San Cristóbal. The summit of the latter, however, is often covered in clouds during winter.

By clicking on the arrows or dragging the scenes you can walk all around the top of the tower of Convento de Santo Domingo.

The rear side of the capital

Most parts of Lima are visited by very few foreigners only.

Río Rimac flows through the city just few hundreds of metres away from the Plaza de Armas and the cathedral. Like most rivers passing through the cities of the world, also Río Rimac is heavily regulated. It borders the city centre to the north. On the other side of the river - and the Panamericana highway on its side - the urban landscape looks quite different.

By clicking on the arrows or in the photo you can change between different views of Lima. 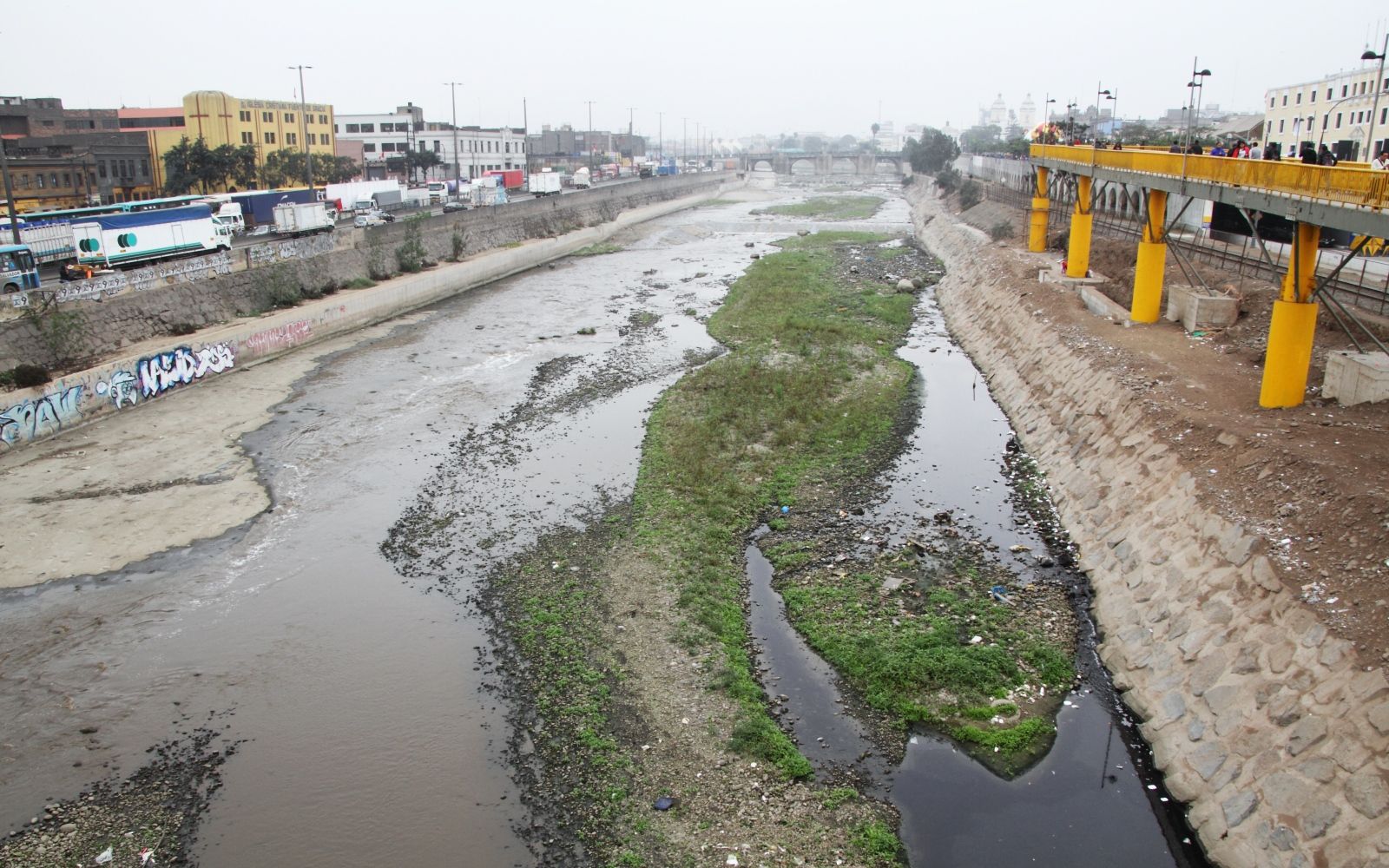 Movie The Andes give, the Andes take with sequence on Lima [Access movie]