The character of Valparaíso is famous all around the world and is the content of many literary, musical, and other artistic interpretations. The city is considered the cultural capital of Chile. In July 2003, the historic centre with its architecture of the 19th and 20th Century was declared a World Cultural Heritage Site by the UNESCO. The Port of Valparaíso is one of the most important harbours of South America. Before the Panama Canal had been constructed, Valparaíso was the first large harbour ships reached after having travelled around Cape Hoorn. Therefore, in the 19th Century the harbour was the dominant one in the Southern Pacific Ocean and, besides San Francisco, one of the most important harbours along the west coast of the Americas. Part of the city centre is built on artificial aggradations along the coast.

Click into the title image to change your perspective on Valparaíso.

A walk through Valparaíso

Click on the arrows or into the photograph to enjoy various views of Valparaíso.

The Edificio Agustín Edwards (better known as Reloj Turri) can be found in the central financial district of Valparaíso, southeast of the Plaza Sotomayor. The narrow front of this building stands for the scarcity of space: the financial district squeezes on a narrow strip of land between the Pacific Ocean and the coastal hills. This photograph nicely illustrates the prevailing mixture of historic and modern buildings. 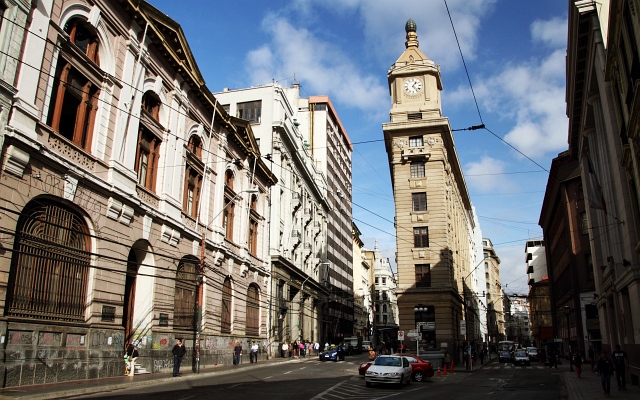 Valparaíso and Iquique: two unlike sisters

This sketch provides a rough impression of the city structure of Valparaíso. Due to the squeezed position of the city centre between the sea and the hills, the roads and blocks are arranged in a less regular pattern than in many other Hispano-American cities such as Salta. Furthermore, there is no colonial centre. Some areas of the city centre convey a somewhat run-down impression with partly collapsed buildings and signs of high unemployment rates.

The contribution on Iquique will help you in answering these questions. 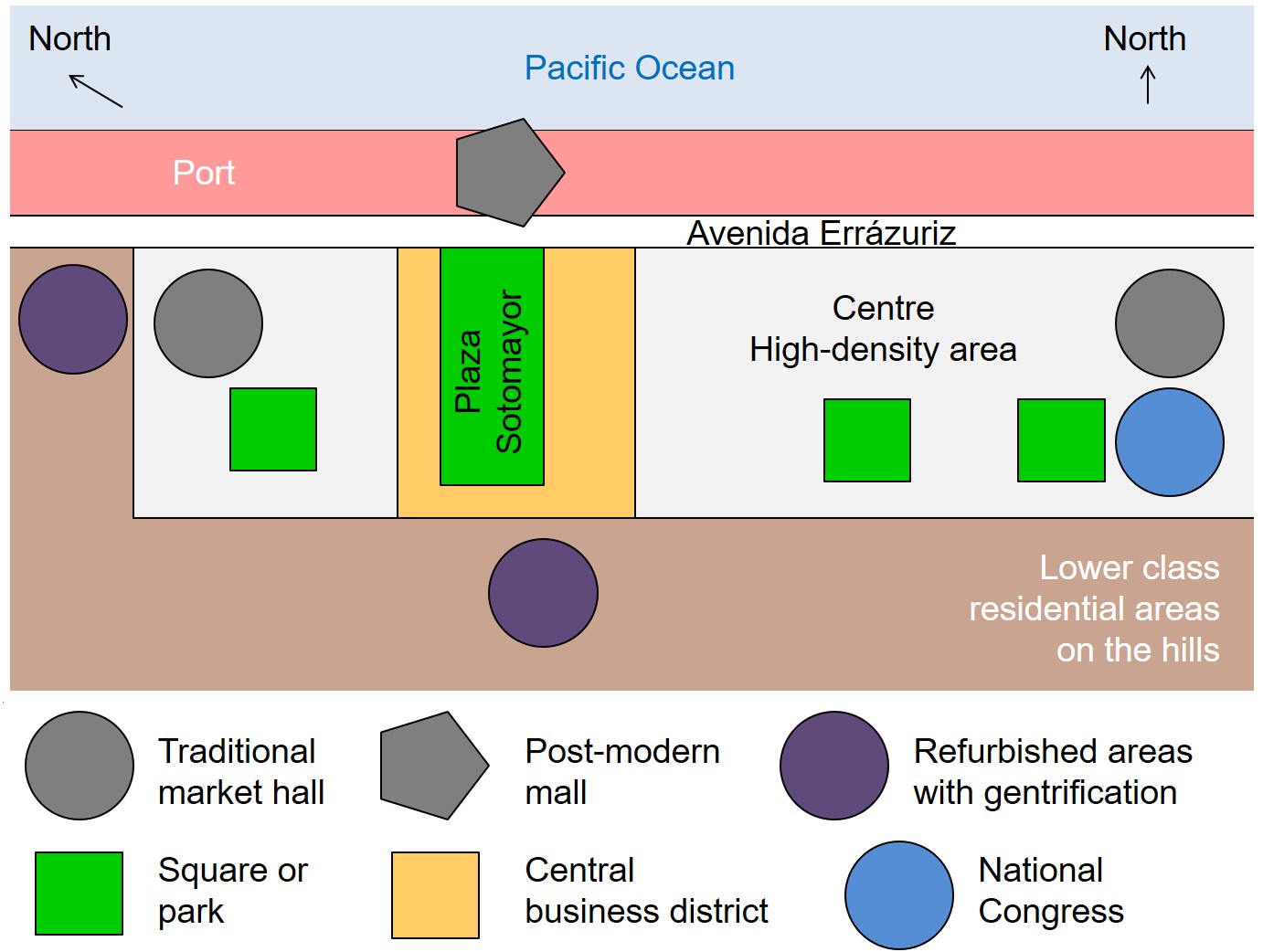 The centre of Valparaíso: good times and bad times

Travel ten years into the past by clicking on the arrows or into the photograph.

These photos show the Calle Blanco, one of the roads running through the centre of Valparaíso. The building in red and white colours in the background served as a market hall in 2006 whereas, in 2016, the windows are broken and the building leaves a somewhat dilapidated impression. Even though the charm of the entire city is somewhat morbid, it is rather uncommon that an entire road in the city centre is lined by hoardings and scaffolding.

In 2006, the same road - here seen from another perspective - was still in a much better shape. What, do you think, could have happened here? 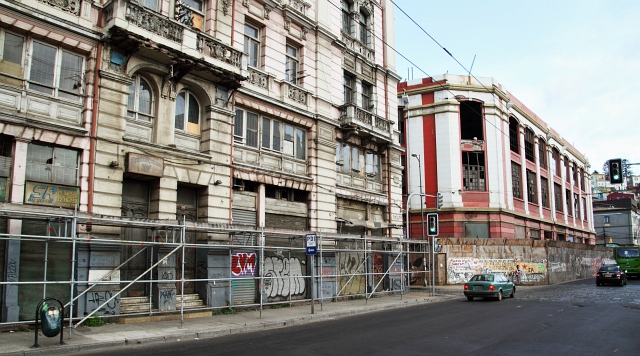 On 27 February 2010, the city was struck by a strong earthquake. It also damaged the harbour, the industrial facilities, and the glass fibre communication lines to Chile. The epicentre was offshore the region of Maule farther south. The earthquake was followed by a tsunami, affecting a broad coastal area. Within a short period of time, it reached various port cities: after 19 minutes Talcahuano, after 34 minutes Valparaíso, and after approx. three hours Antofagasta. The damages due to the earthquake and the tsunami were still seen in 2016 and 2018, in terms of damaged or partly collapsed buildings around the harbour of Valparaíso. The run-down condition of some of the buildings is partly a result of that earthquake - also the Mercado Central was still out of service years later.

This was not the only earthquake affecting the city: due to a strong offshore earthquake on 16 September 2015 at 7:54 pm local time, the Chilean congress - located in Valparaíso - was evacuated. Also in earlier times, the city was repeatedly damaged: so in 1822 and 1851. On 16 August 1906, another strong earthquake with a following tsunami struck the city. Almost all those buildings located close to the seaside date back to the time after this event.

The hills of Valparaíso

Valparaíso is famous for its hilly cityscape with colourful buildings and graffiti. However, only a small fraction of this extensive area has been polished for visitors. The large remaining fraction is home to socio-economically challenged people. This photo shows a neighbourhood as it can be seen away from the more touristy areas. The earthquake of 2010 has left only very few traces here - however, it can hardly be recognized that less than two years before the photo was taken (in April 2014), another hazardous process had devastated the area.

What could have happened here? 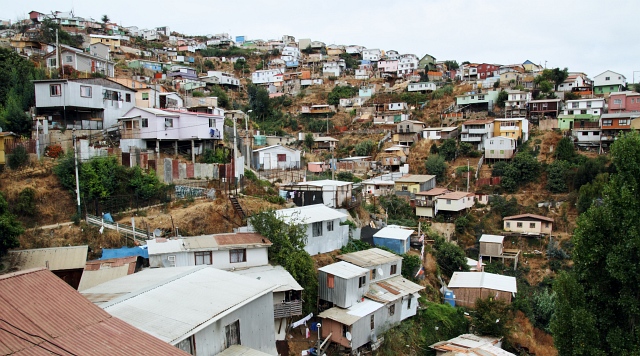 On 12 April 2014, a fire ignited in the suburbs of Valparaíso. This fire destroyed approx. 2900 buildings on an area of 965 hectares; at least 15 people lost their lives. The fire affected twelve neighbourhoods. Many people suffered from respiratory problems due to the ashes. An emergency situation was declared, and 12.500 people were evacuated. It took more than one week until the fire was under control.