When an oceanic plate of the Earth's crust steeply dives beneath another - oceanic or continental - plate, melting of some parts of the upper mantle is often one of the consequences. The resulting magma rises and, when reaching the Earth surface, appears as lava or pyroclastic material in a more or less explosive way. The molten rock is often quite viscous. But sometimes it is fluid enough to form lava flows. Different types of volcanic materials can form slopes within a broad range of inclination angles. This is the principle of the formation of stratovolcanoes. Through the subduction of the Nazca Plate beneath the South American Plate along almost the entire range of the Andes, stratovolcanoes are very common here. Many of them are extinct or dormant whereas others erupt from time to time, challenging the society to cope with the consequences in the most appropriate way.

Click into the title image to visit a number of stratovolcanoes in the Andes. Do you know some of of them? But be careful: two of the photos are not from the Andes, and one even does not show a stratovolcano. Track down the cuckoo's eggs!

Mt. Ngauruhoe is a classic example of a stratovolcano - but it is located on New Zealand's North Island. The Mauna Loa on Hawaii Big Island represents an example of a shield volcano.

As Eva-Maria shows us here on the example of the Volcán Villarrica in Southern Chile, stratovolcanoes have got their name from the sequence of layers (or strata) of different origin, colour, thickness, and resistance against weathering and erosion. In contrast to shield volcanoes, which are usually dominated by solidified lava flows, pyroclastic deposits are more common in connection with stratovolcanoes. 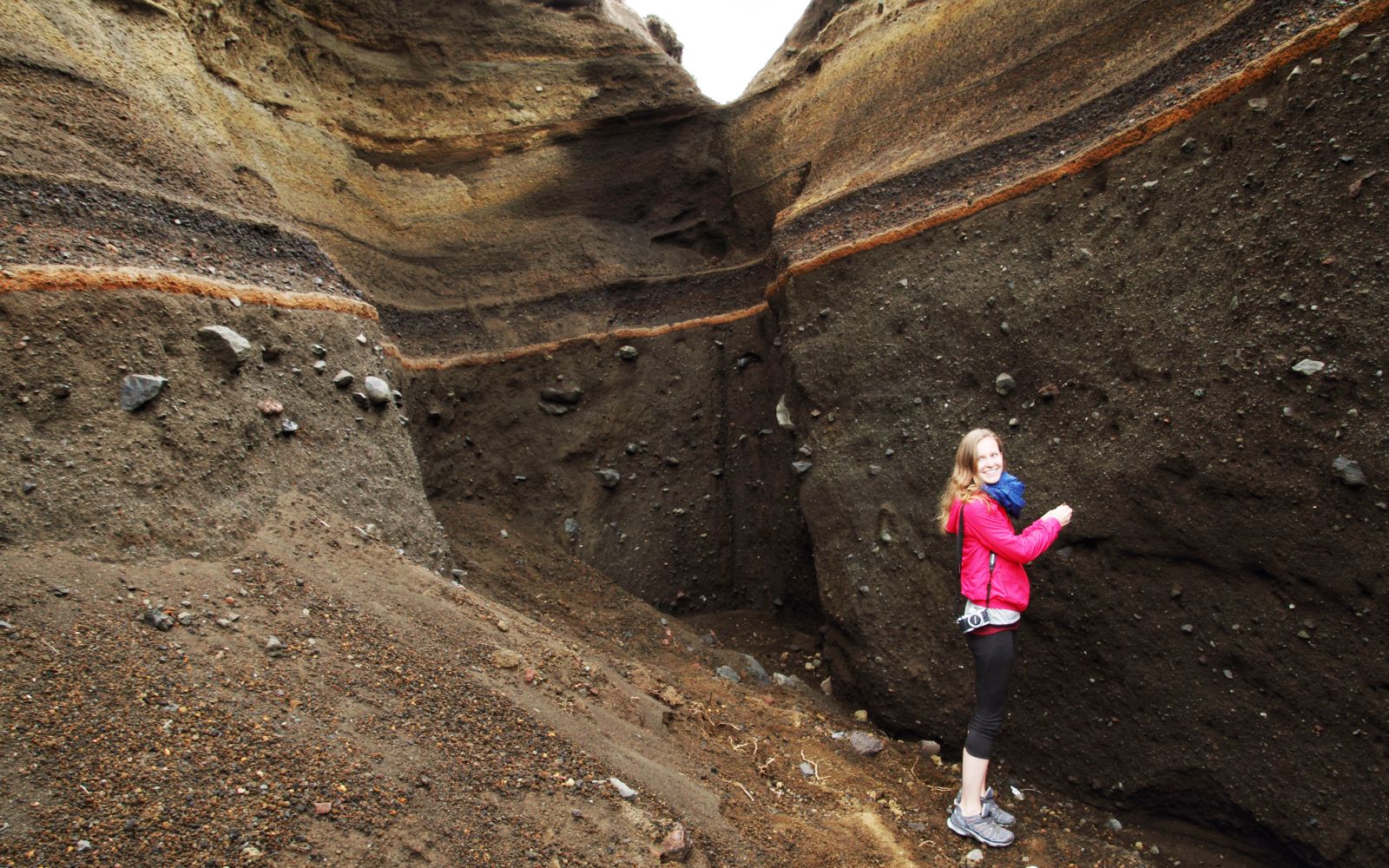 A short episode from the history of a volcano

This stratovolcano can already tell you a long story. Over time, eruptions of different types led to the deposition of one layer after the other - partly of lava, and partly of pyroclastic material. Just right now, the magma chamber beneath the volcano fills up again with andesitic magma: this type of magma is quite common in the Andes and has an intermediate content of silica, and intermediate viscosity.

Click into the magma chamber to activate the volcano. 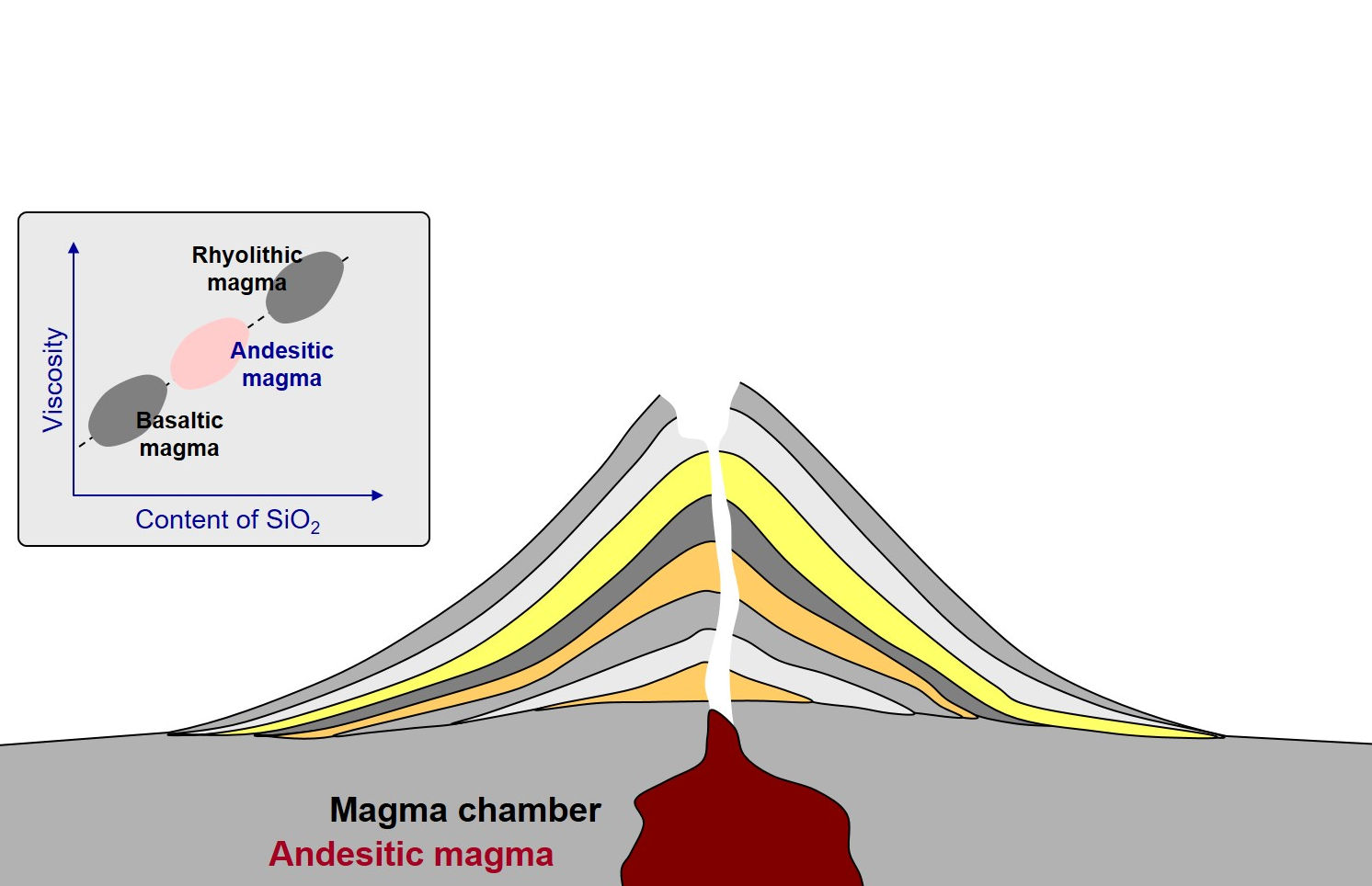 But why are such strong eruptions of stratovolcanoes actually known as plinian eruptions?

A strong eruption of Mt. Vesuvius in southern Italy occurred in the year 79 CE. The town of Herculaneum was destroyed by a pyroclastic flow, whereas Pompeii suffocated in a rain of ash. The Roman advocate and senator Pliny the Younger survived and documented this natural disaster whereas his uncle, Pliny the Elder, lost his life. This is the first known description of an event of such type.

The former summit of Mt. Vesuvius was blasted by the erption, leaving behind a huge crater. Its rim is known as Monte Somma today. Further eruptions within the crater have led to the formation of the modern-time summit cone.