On the way from Mendoza across the Precordillera in direction to Uspallata, the National Road 7 first does not follow the valley of the Río Mendoza, which runs through a narrow gorge in this area, but crosses a low mountin pass farther south and then joins the main valley in a wide basin near the village of Potrerillos. It was exactly this topographic situation - the sequence of a wide valley section and a narrow gorge - which was considered useful for impounding the Río Mendoza: after four years of construction, the 116 m high Potrerillos Dam (Embalse de Potrerillos) was completed in 2003. It is located in the gorge, so that the dam crown can be quite short, whereas the reservoir can store plenty of water in the wide valley section behind. The facility is used for hydropower generation on the one hand, and serves for flood protection and irrigation of the agricultural fields around Mendoza on the other hand.

Click into the title image and view the reservoir from another perspective.

The issue of reservoirs

Fill up the Potrerillos Reservoir by clicking on the arrows or into the image.

This series of satellite images shows the area around Potrerillos at five different points in time. In 2004, filling of the reservoir was still in progress. The scene of 2009 was recorded in late summer, a period when the reservoir is at its maximum level after snow and glacier melt in the high mountains. The scenes of 2011 and 2017 show the reservoir close to its minimum level in spring.

Have a closer look particularly at those changes which occurred between 2011 and 2017: 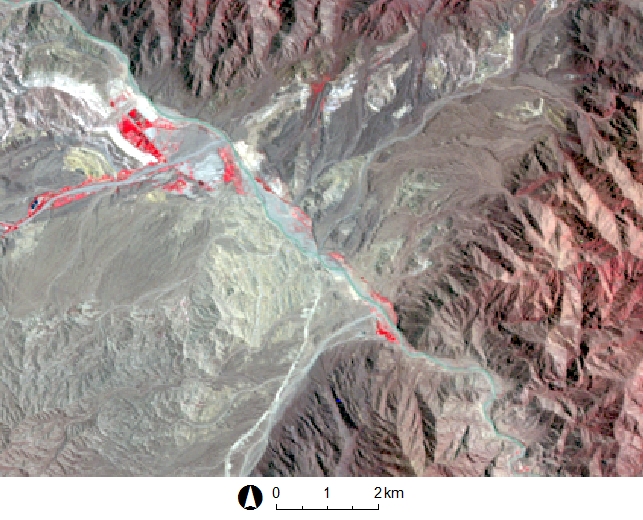 Particularly the rear area of ​​the reservoir shows changes: the Río Mendoza has formed a delta over time, which in 2017 protrudes slightly further into the lake than in 2011. In the scene of 2017, quite distinct yellowish patterns can be seen in the water: this is fine sediment (especially silt), which enters the lake through the Río Mendoza, to a lesser extent also through the lateral inflows, and deposits slowly in the calm water. Coarser particles of the sediment load of the Río Mendoza have already deposited farther upstream, or the latest in the delta.

This means that the bottom of the lake is slowly sedimented and the amount of water that can be stored is reduced until the lake is finally completely filled with sediment, unless countermeasures are taken. In fact, since 2003, the storage volume has reduced from 627 to 420 million cubic metres, although the source of information does not make clear which year the second figure refers to. Particularly the function of the lake as flood protection is endangered by this lower storage volume. Siltation is not only a problem for the Potrerillos Reservoir, but also for many other reservoirs worldwide.

What the rocks can tell us

Click on the arrows or into the photo in order to change between the overview and a more detailed view of the rock layers.

The surroundings of Potrerillos are not only interesting because of the reservoir but also because of their geological features. From the National Road 7, a sequence of layers of red-coloured rocks can be seen in front of the Cordillera Frontal. Those rocks do not form part of the Precordillera, but are much younger. 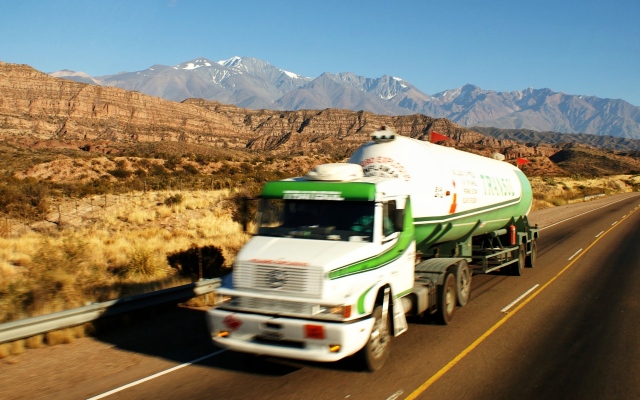 First of all, this is a sequence of sedimentary rocks: the material was first deposited and then consolidated over millions of years. Sandstone is found at the top and at the bottom, with a coarse-grained conglomerate in between, and a fine-grained siltstone directly above the conglomerate. Assuming that the layer sequence was not reversed by tectonic processes (i.e., the entire rock package was not rotated by 180°), it can be seen that the conglomerate formed before the siltstone, whereas sandstone was deposited at the very beginning and at the very end of the sequence displayed. The rounded grains in the conglomerate tell us that it most likely represents a fluvial deposit. Now, the question arises how the various grain sizes were deposited.

Fluvial erosion and sedimentation depends on the flow velocity (and thus the energy), the grain size, and the cohesion between the individual grains. Cohesion is very strong between the tiny clay particles. As soon as the flow velocity increases, silt and sand are eroded and transported first, whereas clay and larger components such as gravel and blocks are taken up at higher velocities only. Conversely, reducing the flow velocity first leads to the deposition of the larger components, then the sand, and finally the silt and clay (cohesion is of no importance here as the clay particles are suspended). As a result, large particles can only be transported at high flow velocities: thereby, individual grains are lifted off the base, a piece is moved forward, deposited, transported further, etc. Clay and silt particles, in contrast, are held in suspension through turbuences and only slowly settle in calm water (see satellite image of 2017 above). On the basis of these points of evidence, the following hypothesis could explain the observed sequence of layers. However, further, more detailed investigations would be necessary to test this hypothesis.

Depending on sediment availability and flow rate, material of different grain sizes was deposited in the river system of which the shown cut slope gives evidence. Thus, in the corresponding period, the average runoff could have resulted in the deposition of the various sandstone layers seen at the top and bottom of the image. A heavy rainfall event or earthquake may then have led to one or more debris flows, or at least increased sediment availability and flow velocity, so that large components were transported and deposited, which consolidated to a conglomerate later on. In the course of these events, impounding of the valley could have occurred, e.g. through a large landslide, which dammed a lake. In the calm water, fine material could have deposited for some time before the dam breached or was overtopped, and normal drainage was restored.

In the contribution on the geodiversity between Uspallata and Punta de Vacas, you can find more exercises regarding the sediment budget of fluvial systems.