Between Uspallata and Punta de Vacas, the Río Mendoza cuts through the Cordillera Frontal. This is the geomorphologically most impressive section on the way from Mendoza to the border between Chile and Argentina. The National Road 7 mostly runs high above the river bed, so that already the journey itself allows for fantastic impressions of the landscape, which is here mainly characterized by river terraces: the often braided river bed is incised tens of metres into older fluvial deposits. However, also the consequences of landslides - ranging from debris flows to rock slides - are omnipresent. Several points of interest invite for a stop on the way, whereby the most comprehensive view can be enjoyed just upstream from the small village of Polvaredas.

Click into the title image to get a first impression of the extraordinary geodiversity characterizing the valley section between Uspallata and Punta de Vacas.

River terraces between Uspallata and Polvaredas

Drive along the valley of the Río Mendoza upstream and and marvel at the impressive river terraces.

River terraces of various types accompany the Río Mendoza along its entire course between upstream of Polvaredas and Uspallata. Alluvial fans or debris cones are often superimposed on the terraces, clearly differing in coulour from the deposits of the Río Mendoza. This is a consequence of the high diversity of rock types - many of them of volcanic origin - in the catchment. River or debris flow deposits, particularly from small catchments, therefore often have their characteristic colours (see also title image).

How do river terraces develop? As a first step, try to describe and to graphically illustrate the sequence of processes. 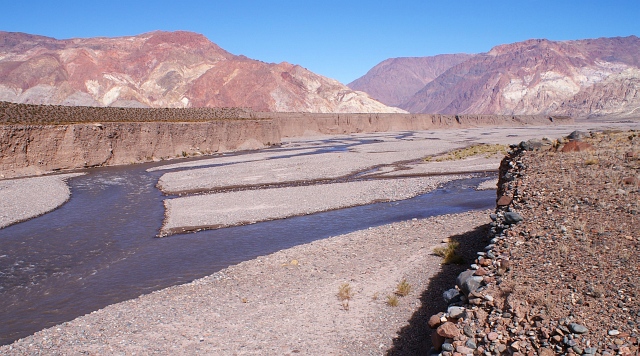 Click on the arrows or into the graphics to pass through the various stages in the evolution of river terraces.

River terraces form when rivers first deposit sediments, and later incise into their own deposits, whereby incision can also lead to cutting of alluvial fans or debris cones of lateral valleys (see title photo). This cycle can repeat itself for two or more times, so that several generations of river terraces may be observed in the landscape. In the contribution on the Potrerillos Reservoir you can learn more about some basic concepts of fluvial erosion and deposition.

In the graphics you can see a river which has accumulated a wide valley bottom through continued deposition.

But why is there a change between sedimentation and erosion by the river? Formulate one or more hypotheses and thereby tell the story of the valley.

Over time, rivers develop a concave longitudinal profile which is in a dynamic equilibrium with the level of the receiving water, discharge, flow velocity, and sediment availability. In order to achieve this equilibrium, some sections are eroded whereas sedimentation takes place in others. If one of the boundary conditions changes, then the spatial patterns of erosion and sedimentation change as well. Two particular aspects are considered in detail here:

Not only fluvial processes shape the valley section between Uspallata and Punta de Vacas. As already shown in one of the title images, the valley is blocked by two prehistoric rock slides upstream from Polvaredas. According to their colours they are called Amarillo (Yellow) and Negro (Black). They have moved down from the two different sides of the valley, and afterwards the Río Mendoza has eroded a deep gorge into their deposits. In contrast to earlier assumptions, Amarillo with an age of slightly less than 9000 years is younger than Negro with an age of almost 19,000 years. 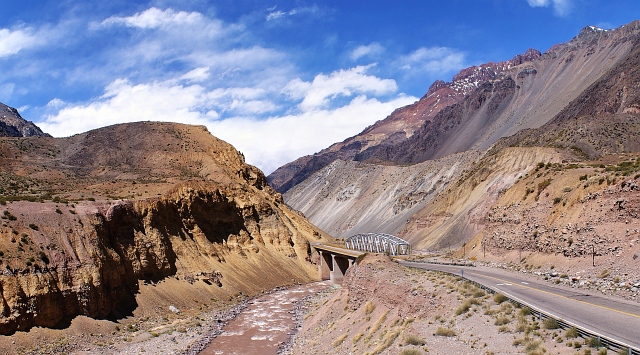